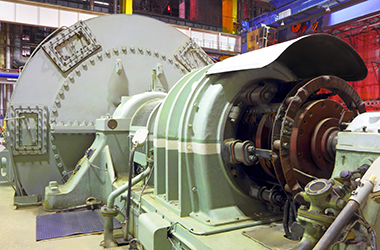 When a utility company experiences failure causing unplanned shutdowns or outages, it is disastrous and tremendously expensive. Arizona Public Service Company experienced such a shutdown and learned the value of advanced  field ground fault monitoring systems. As a result, they installed Accumetrics’ AT-8000 Earth Fault Resistance Monitor (EFREM) on the brushless exciter of the combustion turbine generator in a combined cycle unit.

When a large storm blew in, the EFREM system delivered – offering protection for the generator and helping the team avoid the expense of an outage. The system had been collecting baseline data on the unit for several months when late one evening a severe thunderstorm hit and the system’s alarm was triggered. While the distributed control system computer had locked up, the AT-8000’s alarm was still functioning. When the software was restarted, the EFREM logging software showed very low field resistance. This indicated damage to the field windings of the exciter, alerting the team to contact Accumetrics for support. Working with the onsite operators, Accumetrics determined the generator had ingested storm water which caused the alarm.

In order to meet the next day’s peak demand, the operators made the decision to run the machine up to synchronous speed, turn on the excitation system, and closely monitor the field resistance to ground. With the EFREM system’s trending capability, operators were able to monitor the field resistance as they brought the machine back online. As the machine started to dry out, operators watched the resistance return to normal levels. If not for the EFREM system’s trending capability and support from the Accumetrics team, the machine would have been shut down in an effort to determine a cause for the alarm, costing the utility a great deal of time and money.

This single event paid for the EFREM system many times over. According to a spokesperson, “Based upon APS’s experience at West Phoenix, we are convinced that our decision to use the EFREM was a wise choice. The ability to collect quantitative information on the fault resistance and location will prove invaluable in protecting generators and making informed decisions about continued operation of our units when ground faults are detected."  Read the whitepaper on the Arizona Public Service Company's full experience with EFREM.